Have you ever wondered why the LGBT’s symbol is the rainbow flag?

Artist and gay rights activist Gilbert Baker, born on June 2, 1951, and died March 31 last year decided to create the rainbow flag after being urged by Harvey Milk, the first openly gay elected official in California, to come up with the symbol for the gay community.

Back then, our community’s symbol was the pink triangle that was put on us by Hitler and the Nazis during his rule, as a concentration camp badge for homosexuals (and sexual misconducts). It only shows that this symbol has a very negative and terrible meaning so Baker wanted our new symbol to express our beauty, soul, and love that came from us and was not put on us.

According to Britannica, Baker decided to make that symbol a flag because he saw flags as the most powerful symbol of pride. As he said later in an interview, “Our job as gay people was to come out, to be visible, to live in the truth, as I say, to get out of the lie. A flag really fit that mission, because that’s a way of proclaiming your visibility or saying, ‘This is who I am!'”

END_OF_DOCUMENT_TOKEN_TO_BE_REPLACED 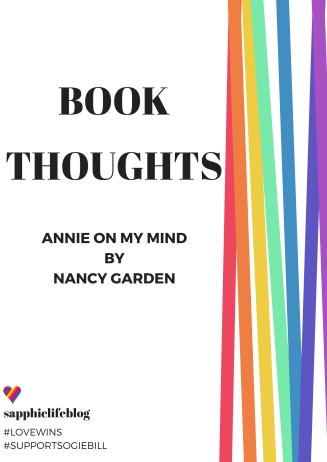 “I went downstairs to Dad’s encyclopedia and looked up HOMOSEXUALITY, but that didn’t tell me much about any of the things I felt. What struck me most, though, was that, in the whole long article, the word “love” wasn’t used even once. That made me mad; it was as if whoever wrote the article didn’t know that gay people actually love each other. The encyclopedia writers ought to talk to me, I thought as I went back to bed; I could tell them something about love.”

I’m not really good at book reviews so I opted to make it into “Book Thoughts” because I usually just say what I think about a book in a concise and short manner. But before going on about Annie On My Mind, I just want to tell a little background story:

Since discovering and embracing my sexuality, I decided to consume more LGBT stuff, something that will give me knowledge about being LGBT and to remind me and show me that what I am is not abnormal and to see more and good representation, a proof that we don’t have to hide anymore, that we are and can be free. So, I started on LGBT+ literature.

END_OF_DOCUMENT_TOKEN_TO_BE_REPLACED

It was around June last year when I decided to go to my first Pride. It was like a challenge for the social anxious me and I just wanted to do something new just like what my Psychiatrist recommended. Also, it had been long overdue since I’ve been wanting to go back in 2016.

So I began researching about going to Pride and that’s where I discovered Pridekada. Someone posted about a group chat in twitter and we could join if we were interested.

I just wanted to have a group at Pride so I wouldn’t be alone, I guess, and that I could familiarize myself with the people that would go there so I commented my twitter username and that’s where it all started.

I met these wonderful people I call my family now.

END_OF_DOCUMENT_TOKEN_TO_BE_REPLACED

The Philippine LGBT+ community had it’s 24th Metro Manila Pride March and Festival on the 30th of June.

It was my second time attending but now as a volunteer together with my friends.

It was also my first time volunteering in such a big event so I can just imagine the introvert and anxious me the day before the event.

This didn’t stop me since I really want to give back something to the community that has secured me a safe and loving space. 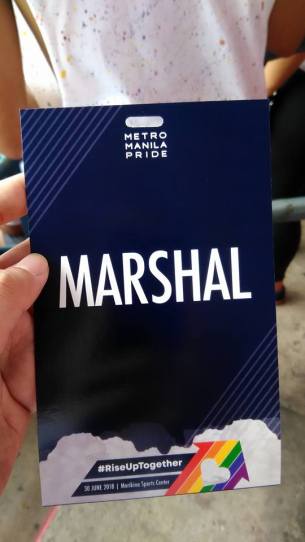 We were asked to help around in different committees. Since our job is more about gathering orgs for the parade, we anticipated the orgs assigned to us around 12 noon when the gates were expected to open.

END_OF_DOCUMENT_TOKEN_TO_BE_REPLACED

This blog would be sharing LGBT stuff and life being sapphic in the Philippines.